Hello from Angelica again! We had a fun meeting this month with some Show and Tell, a new Block of the Month and an awesome demo from Colleen. Since Jan was having a blast in Spain, VP Jessica led our meeting for us (thanks Jessica!). :)

Our Show and Tell started off with Linda. She brought in her quilt top made from a layer cake she won at last month's meeting. What a fast and fabulous finish! 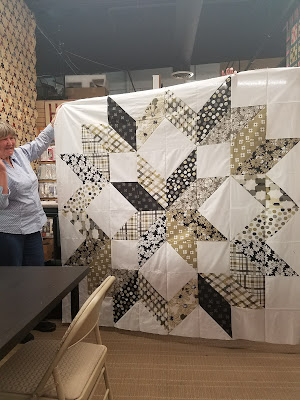 I shared a Tula Pink quilt I won through an Instagram giveaway. I was so excited to win it, especially since it was signed by Tula Pink herself! The giveaway was done through @sewkindofwonderful, who also made the quilt). 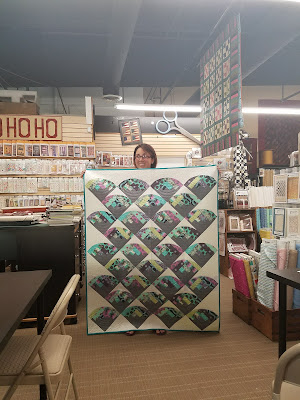 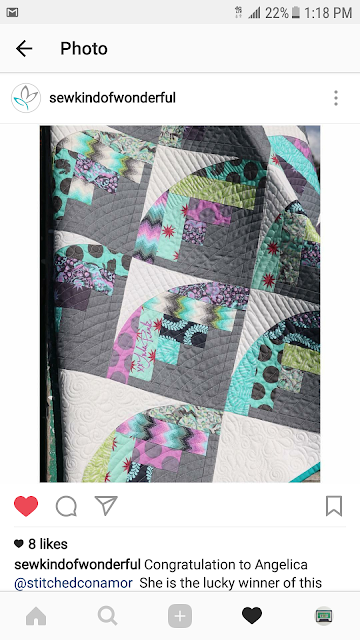 Susan brought in a mini quilt she made from scraps. She also took a stab at hand embellishment (which she says she'll never do again). 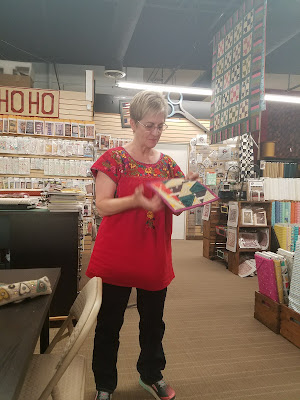 Susan had purchased a kit from Primitive Gatherings that made a felted wool applique pin cushion, a scissors holder and a pin holder. 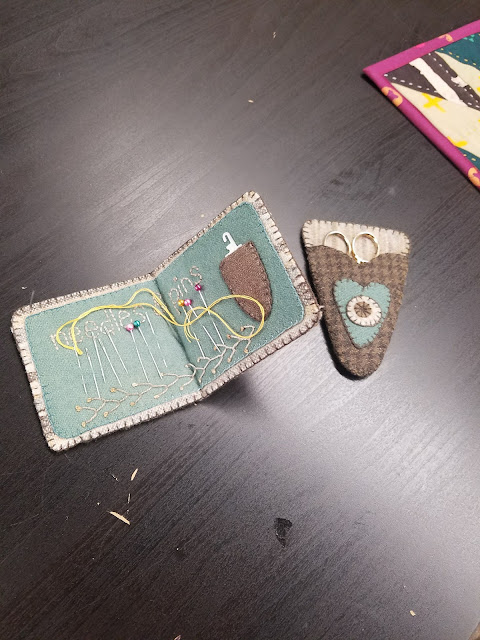 Colleen told us about how she's in the process of moving her studio to another room in her house, which meant she had to take down all her mini quilts from her wall. She brought two of them in to share. The first was an adorable postage stamp mini she made a while back. 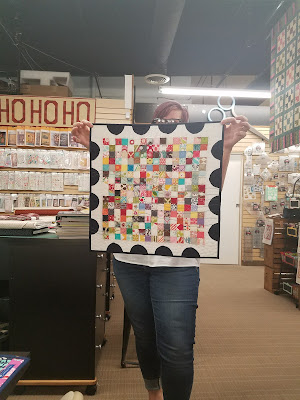 The second mini quilt was one of her favorites which was made by someone on Instagram for a Cotton + Steel mini swap. 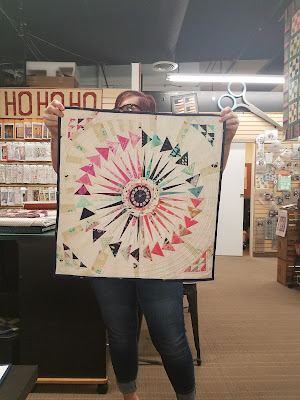 And the back looked just as cute! Patti brought in her new tote bag she just recently made (her old one was stolen!). 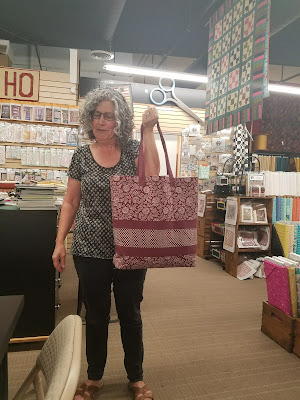 She also brought in a cute baby quilt and a batik wonky star quilt. 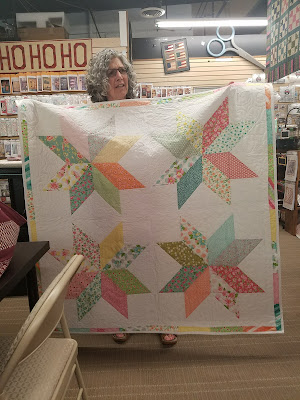 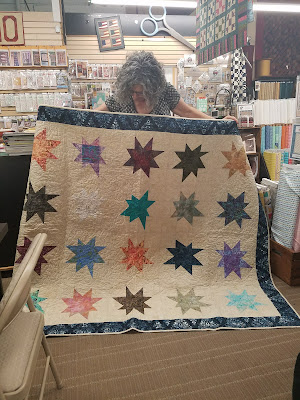 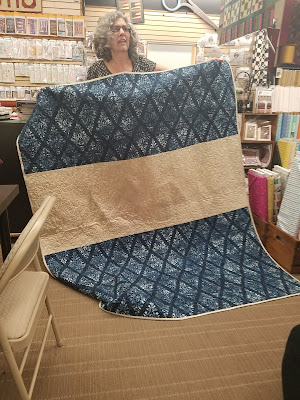 Judy brought in her "Room and Board" quilt blocks she's been working on . 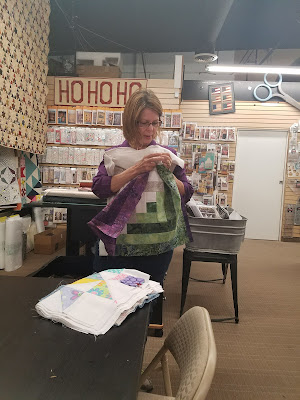 She recently taught her 9 year old granddaughter to sew and she helped her put this large block together. 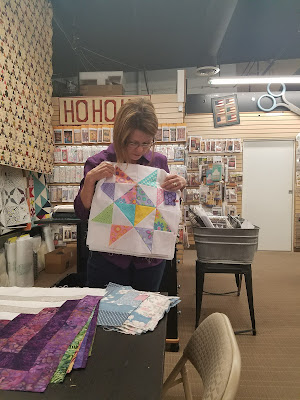 And she showed us her first quilt she ever started back in 1989. They were "quilt in a day" blocks. 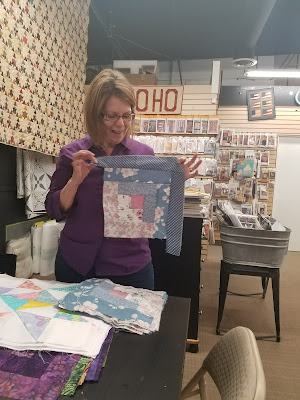 Natalie brought to the meeting this cute wallet she made from a kit she purchased while at Road to California. 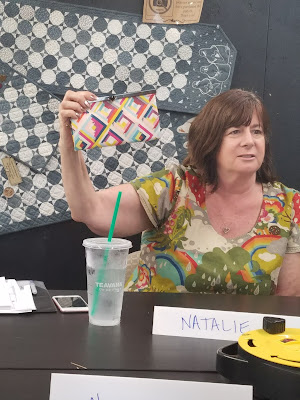 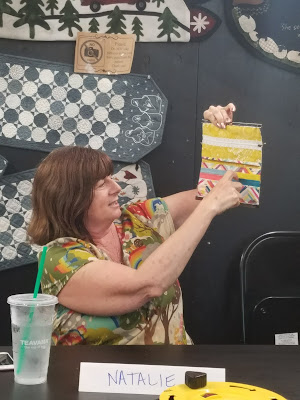 Nancy brought in a baby quilt that started out as her entry in the Solids Challenge (that ends next month). She decided to add a pretty floral print for the binding and the backing. 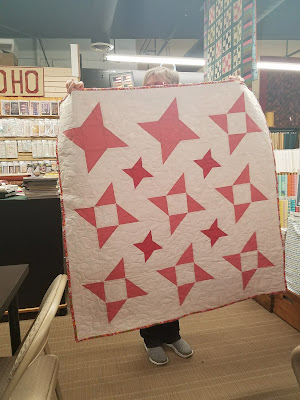 Maritza brought in an adorable quilt top made from a panel (middle section) she purchased at Road to California. The bottom section was pieced and the top section was appliqued to match. 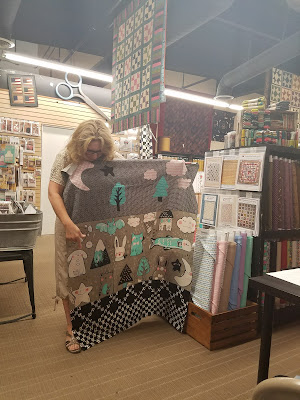 This quilt she made using the block of the month she did for The MQG in January! How cool is that?! 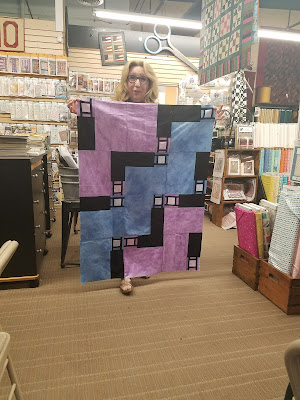 Jessica shared with us a flying geese block she made using solids. 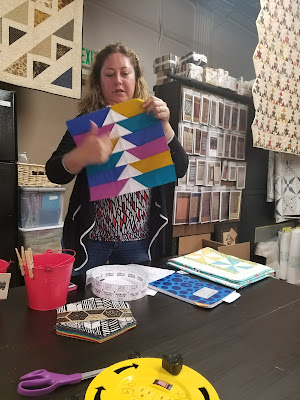 She also brought in this cute little flower wall hanging she made to hang up in her new office at work. And now everyone at her work wants one, too. ;) 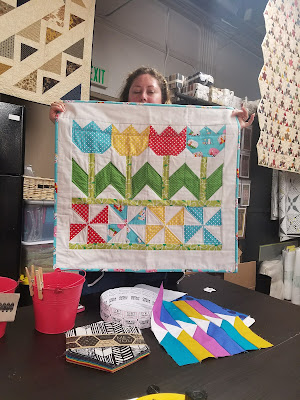 After show and tell, Colleen introduced next month's Block of the Month, which is called the Double Pinwheel. Her tip was to use the Bloc-Loc to trim the half square triangles (or HSTs). 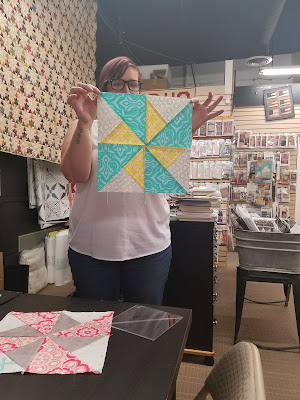 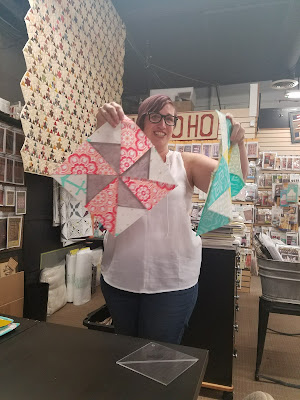 The Demo for the evening was brought to us by Colleen. She showed us how to make these beautiful rope bowls. She went over the different sizes one could use to make these and how to start and finish a rope bowl or coaster. 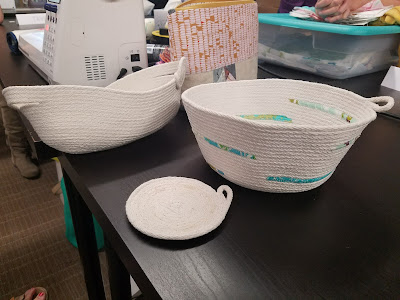 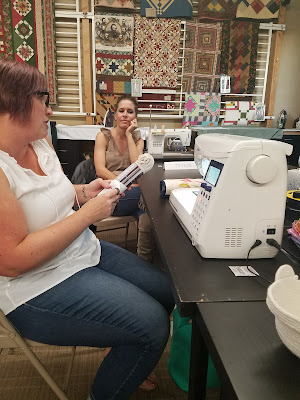 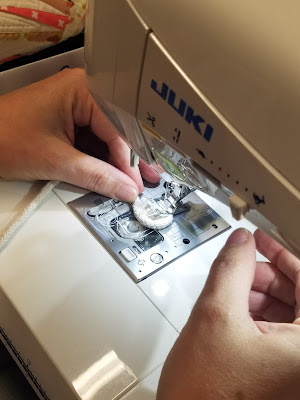 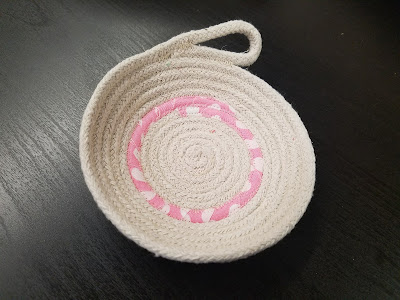 Here are all the blocks we collected. So many pretty envelopes! 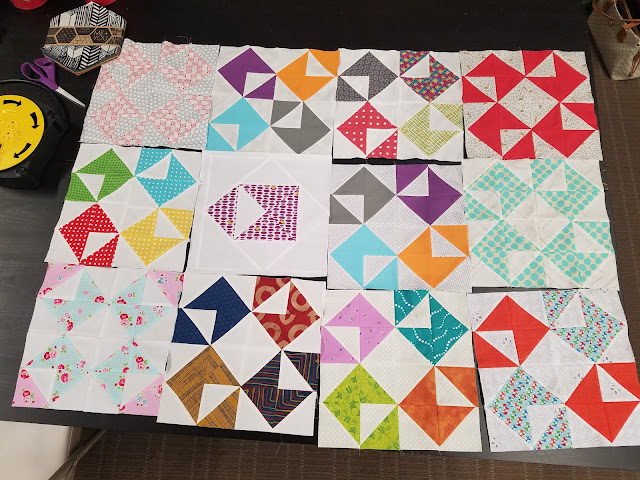 Next month's meeting Jan will be back with us. We will be meeting on May 18th at 6:30 at Primitive Gathjerings. Remember to bring in your BOM blocks from this meeting (see Tutorials tab for details on the May Block of the Month). Hope to see you all!

Posted by Angelica Jones at 4:47 PM